3 Ways I Know You May Be Lying On Your Resume 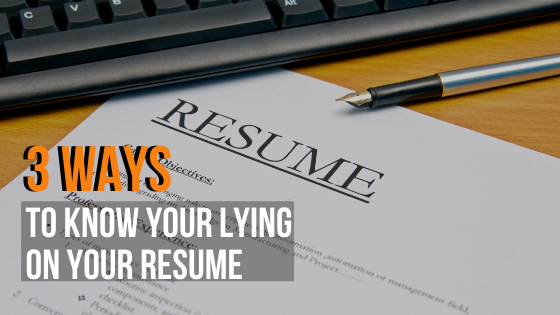 3 Ways I Know You are  Lying On Your Resume

I might not be a psychic when it comes to detecting resume lies or fudged truth on a resume, but I get pretty close to that. Not that I would need such a gift. The really tell-tale signs of lying or exaggerating on a resume read like non-sequiturs to an experienced recruiter or hiring manager: they just don’t make much sense.

What follows is by no means an exhaustive list. There are other signs, but the three I am about to share with you are often blatant fabrications… In some of the unmentioned cases, simple negligence or ignorance are just as likely to be behind the howlers as dishonesty.

At any rate, I want to focus on the top three because–whether you are a hiring manager looking for a tip or a job seeker flirting with advice from your left shoulder–what follows are, to an experienced professional, the most glaringly obvious lies that I encounter on a regular basis.

Unless you are a business owner who has decided to list your title and function on your resume (i.e., “President / Marketing Consultant”), you should know that the vast majority of corporate HR departments do not issue official titles containing slashes. In almost all cases where a slashed title exists, the candidate has added words in hopes of making it reflect what they did (or what they think they did) and was not an HR-issued title.

While it is sometimes true that a candidate has performed the duties indicated by an appended title, there are ways to communicate this fact without making it seem as though they have been hired to perform those specific duties.

Percentages tend not to end in 5’s and 0’s across the board. So when I read a resume in which all sales achievements end in X5% or X0% or all expense-cutting efforts result in X5% or X0% savings, it makes my left eyebrow arch into a question mark. It’s just too convenient. So yes, I think a candidate is making it all up when all their numbers end in 5’s and 0’s.

At my most charitable, I have to assume that the offending party is simply too lazy to track down their precise numbers. Whatever the case, be it the result of laziness or a straightforward willingness to fudge data, too many nice round numbers stick out like extra thumbs. They also inspire me to point mine down.

There are several possible reasons for mysterious “consulting” roles appearing on resumes. It might be that applicants think that “consultant” is such a broad designation that they can claim to have performed the job simply because, at some point, they offered advice while on the clock. Either that or they hope that including the word “consultant” will get them through the automated screening process so they can win over the flesh-and-blood interviewer with scintillating wit and gregarious personality.  A third possibility is that a candidate doesn’t want to go through the hassle of explaining an employment gap and thinks that “consulting” would make a good coverup.

Whatever the case, when someone claims that they have been consulting but fail to list specific companies or experiences that could validate their claim, I am going to call BS. Every. Single. Time. If you didn’t work, own it and explain what you were doing. Even if you took a few months and lived off your partner’s income while you tried to figure things out, this is less of a red flag than mysterious consulting gigs.

Recruiters and hiring managers see this one all the time, and it is even less forgivable than rounded-up percentages or negligible job titles. These, at least, can possibly be “honest lies:” inaccuracies containing a gracelessly expressed truth for reasons of convenience. Mysterious and nondescript “consulting” positions, however, are transparently intentional attempts at deception. Nothing gets a resume thrown out with more speed or contempt.