3 Ways to Move from an Executive to C-Level Role 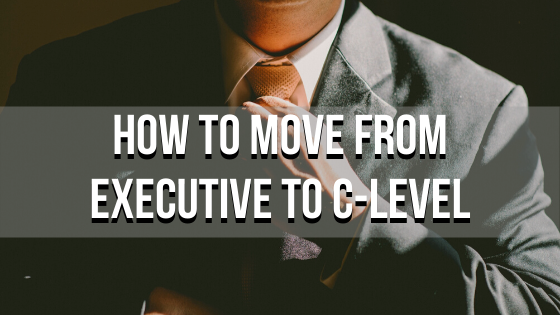 The higher level the job, the more risk a company assumes. At this point, the job is less about generic qualifications and more about your people skills and leadership qualities.

This terrain can be tricky because it’s more subjective. However, by implementing some of our tips you’ll better your chances of moving from an executive to a C-level role within the organization.

Make sure you can work with different departments.

In order to be a top executive of an organization, it’s important that you learn to work with different departments

As a C-level exec, you would no longer responsible for just your sector, now you’d be the one creating strategies that affect the company as a whole.

That’s why it’s imperative that you learn how the different departments work cohesively. You’ll also want to beef up your skills in different areas. For example, if you’re more involved in the finance sector consider learning how the sales and marketing team works. Furthermore, you’ll want to learn how one affects the other and vice versa.

Lastly, build rapport with managers from different departments. They’ll be able to put in a good word for you and show how you’ve made an effort to understand the different aspects of the company.

Leadership qualities are what truly separate executives from the c-level role. It’s easy to manage people, however, it’s not easy to lead people.

Leadership takes vision. It also takes the ability to move a big group of people toward that vision.

As such it’s your job to start taking more responsibility. Note, this doesn’t mean simply executing a campaign strategy that was handed to you for your particular department.

This may mean taking initiative on things that would require to work with departments across the board as well as create the strategy yourself.

The tricky part is you may not always be able to this within the role of your job, in fact, it will probably require looking outside of your job. For example, volunteer to spearhead the company’s annual corporate-run. Or, get involved with any big initiatives that require raising money for a charity the company is affiliated with.

These two examples may not seem relevant but consider this: both scenarios require you to work with a massive group of people from all departments. Both scenarios also require you to raise money. These are two skills that would be essential at the C-Level and your current executive role may not give you the flexibility to enhance those skills within the job.

As an added bonus, current C-level execs typically have to be involved in some way for these kinds of events, even if it’s just giving a keynote at the charity. This would increase your exposure to them which brings me to my next point.

Build a relationship with top managers.

When you’re vying for a C-Level job your chances of getting it may rely more on how you and the CEO get along rather than qualifications.

If you’ve made it this far you’re obviously qualified, as such what a company is more concerned with is whether or not you can work with the people on top. According to The Ladders, it’s almost as if you practically have to be sponsored by a top executive to be promoted at this level.

This is much more subjective and has a lot to do with personality, reputation, and rapport. As such it becomes your job to build a relationship with top managers. Find ways to get to know them and increase your exposure to them