5 Qualities of Olympic Champions that Can Help Your Career 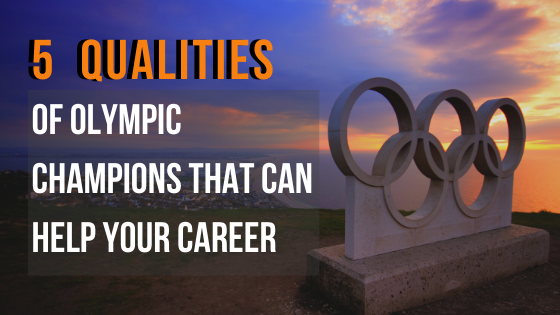 Do you know why people go berserk for the Olympics? It’s not necessarily the sports. The Olympic Games appeal to each of us because they remind us of what we can accomplish if we commit ourselves to tapping into our inner excellence. Sure, not everyone can be a born marathon runner or a natural gymnast – but if you hone and develop the psychological skills and personality traits that Olympic athletes have in common, you can go incredibly far in your chosen field.

5 Qualities of Olympic Champions that Can Help Your Career

In December 2001, doctors at the University of North Carolina at Greensboro conducted extensive interviews with 10 U.S. Olympic champions in an effort to determine what those common qualities are. Their findings isolated a number of shared characteristics that will probably not surprise you.

1. The ability to focus.

When in the context of sport, this makes all the sense in the world. It makes even more sense when applying that quality to your daily professional life. Far too often, people are led to distraction. Without strong focus, it’s almost impossible to achieve the things you’ve set out to accomplish.

There’s a clear difference between establishing goals and dreaming up a mental wish list of things you’d like to do. The latter consists of all whimsy and little effort, while the former relies on your ability to set realistic goals and to take daily steps to achieving it.

All too often, people have the tendency to want to “do it alone.” But you can learn a lot simply by looking at what every single successful Olympic athlete has in common: a great coach. What’s even more important than having a coach is to be someone who is coachable, who’s not too proud to admit they may be doing something wrong, and who can learn to listen and incorporate good advice into their pursuits.

It takes a lot of guts to compete on a global stage with some of the best athletes in the world. Without a healthy dose of confidence, even the most capable athlete would crumble under the pressure. Likewise, confidence is a critical psychological trait that is absolutely necessary to own if you want to have a successful career.

Competition is the main driving force behind every successful Olympic athlete. This much is a given. Yet for many athletes and professionals alike, it’s the lack of a competitive spirit that often stands in the way of going above and beyond to achieve superlative performance. Without the desire to beat the competition, few people ever reach what can best be described as “world-class” success.

Olympic champions aren’t born – they’re made. Likewise, you can achieve heightened levels of success if you commit yourself to develop the innate traits that world champions share.