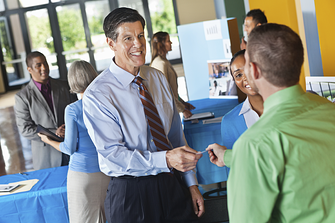 Last month I made our annual pilgrimage to the RSA Security Show, an event chock full of clients, prospects and excellent candidates for our Security practice.  The show had grown by 30-35% since the 2013 edition, with an entire 2nd pavilion devoted to the largest vendors such as Symantec, HP, cisco, Juniper and Microsoft.  There were so many small and medium-sized vendor booth, that some of the booths were shared by more than one vendor, each having a day to themselves.  Attendance has jumped and repeat, multi-day foot traffic was tremendous.

Literally each and every firm I met with was hiring technical people, primarily developers, and more than half were hiring revenue-side people in sales, marketing and sales engineering.  Many of the hiring managers I met had lost one of their key people since the start of year, in addition to trying to make new hires associated with increased demand and a growing sales force.  I expect that the second quarter of 2014 to look the same:  strong demand for moneymakers!

As we continued to work on searches and solicit for new ones, the demand picture has clearly emerged that the Sales Engineering talent arms race is reaching a boiling point, with

candidates receiving multiple offers, as well as counteroffers from their current employers.

Hiring manager and their HR counterparts obsess over creating a winning team atmosphere, and work hard to be competitive on salary, benefits, quality of life and opportunity to achieve sales targets.  This helps them attract and retain the best Sales Engineers.  But in times like these a high-demand, seller’s market (especially in the NYC, SF, Boston and Northern Viriginia geo markets) where candidates have the upper hand, those factors may not be enough to build (and retain) a great team.

When the demand picture changes this drastically, hiring team must adapt their tactics and streamline their process.   You should assume any candidate that you are interviewing, and certainly the few that you deem worthy of an offer, will have multiple competing offers, from your direct competitors and from firms who compete for the same talent pool.  Too often hiring managers think of the direct competitors in their Security market product niche as their only competition.   Resellers, consulting firms and end users seeking Top Security Talent should also be considered competitive threats for the talent pool.

I’ve found in 27 years of recruiting that hiring firms react slowly to a hot market and alter their hiring process ONLY AFTER a few painful losses.  Those who adapt fastest, maybe even before the p
ain of a defection or missed opportunity for a great hire, will always thrive.  Otherwise all that effort in being monetarily competitive and team-building goes to waste.

Think aboout these when you look at how your firm is hiring:

Never stop sourcing candidates and interviewing.
Interviewing candidates fairly continuously allows managers to keep an eye on the talent pool, collect all kinds of competitive information (you know you do it!) and limit then downside risk of losing a member of your team, whether to a competitor or internal transfer and promotion.   This may not be practical for more complex hires, but the best sales VPs, SE managers and especially Inside Sales managers I know are never far from an interview.

Eliminating or simplifying steps may allow you to see that extra candidate, or get that Rock Star candidate through the process to an offer faster.

Question all the steps in your process:

Can we do this interview on a conference call with more than one decision maker?  In these we suggest that one person run the call and ask the questions, with others mostly listening or IMing the questions to the moderator.

Can we eliminate this step?
Can we change the order of the steps in order to eliminate "bad fit, no hire” candidates earlier and with less team involvement.   We had a client that used a sales assessment as a threshold test.  If the candidate didn’t fit their profile for a sales rep, according to their online assessment, the process ended there.  Think about which step may be that threshold, and move it to the beginning of the process.

Trust your hiring managers.  Expect them to make mistakes.

So much of the trend towards multiple interview rounds is about CYA.  Everyone is petrified about the costs of a bad hire, particularly when there's a recruiting fee involved.   Managers must know that they can survive some bad hires.  When I talk to Sales Engineering Managers about hiring, they always remember bad hires, or bad employees that they inherited when they moved into the jobs. At some point, all of those people must have looked good enough to hire!  They can also recall the people who rose the occasion and grew into SE roles they may not have been hired for, had hey been an outside hire.   For nearly every manager I speak to, this is how they got into sales or sales engineering.  Someone gave them a shot!   You can't interview your way into emliniating the risk of a bad fit.  Frankly, interviewing is the least-best way to hire, because everyone (including the employer) is on their best behavior.  This is why people hire employees they have worked with before, even if the role or technical fit is not ideal.  They know how this person is going to work and interact with the rest of the team and more importantly, with sales prospects.

Managers need to pull the trigger on hiring decisions with a little less than optimal confidence, if they want to compete for the best people, and if they need to hire multiple people in this market. That may be very uncomfotable (especially engineers!) but that is the current market reality.

You’ve identified the winner.  Now what?

The market for revenue-producers in the IT market has bloomed, at least for the short- and medium-term.   What worked in a low-demand environment (2008-2011) will not work in this high-demand market.

Take a hard look at your process, and choose to compete at every step.