How To Be Prepared For The Next DDoS Attack 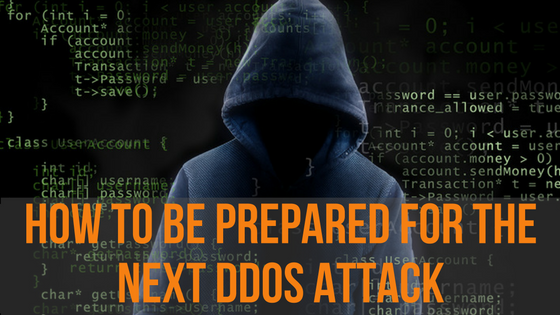 With the recent cyber attacks against the DNS service provider Dyn, information security experts are doubling down their effort to develop the next generation of prevention and solution methods. In other words, the demand for online security has never been greater.

What was once a luxury item has now become a necessary component for your business's online presence. When a single cyber attack can shut down half of the internet, its safe to say it’s time to thoroughly check and protect your property.

Distributed Denial of Service (DDoS) is a digital attack that attempts to disable any online service by sending an overwhelming amount of traffic from multiple sources, also known as ‘Botnets’. Though these attacks do harm, they are not intended to expose or steal any personal information, but rather overpower a hosting server, making it unavailable to users. Over 2000 DDoS attacks are observed daily with one-third of all online downtime complications resulting from DDoS bombardment.

The process of recovering from an attack can take from hours to days to weeks; all depending on the depth and breadth of the strike. All businesses should take the precaution of purchasing an anti-DDoS service to insure your IT safety.

In a volume-based attack (ICMP), the network/service bandwidth becomes congested with a mass amount of traffic resulting in a flood of access requests. Due to this attack all applications and services are rendered useless.

An application violation (Slowloris) targets the expected behavior of protocols (TCP. HTTP.) by tying up computational resources and preventing the user from accessing their requests. These types of attacks are very difficult to identify and defeat.

There is just too much on the line when it comes to protecting your online assets. Always keep in mind that it only takes one single attack to compromise your business and your customers' online safety. Beat the botnets to the punch, and take immediate action by purchasing a protective service.

Better to be safe than... you know the rest.

IS YOUR CYBERSECURITY AS SOLID AS YOUR BUILDING SECURITY?