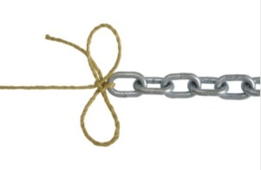 The strategy known as “the strength of weak ties” could be the secret sauce in your job search. Essentially, it entails reaching beyond your traditional networks to casual contacts. The latter know of job openings your colleagues don’t. This article describes seven simple ways to make those connections with weak ties.

It’s no secret that jobs most often come through people. They provide information about openings you wouldn’t have known about. Often those aren’t listed among the help-wanted ads. Also, it’s people who hire you. But, not all those people contacts are equally effective in your job search. In 1973, Mark Granovetter, a sociology graduate student at Johns Hopkins University, published breakthrough research in the American Journal of Sociology. It documented that those whom you assume you should count on – members of your own networks – could be the least useful. The biggest return on investment in networking could come from people you know casually, that is, weak ties. A typical example would be Joe who runs the coffee stand in the office high rise. He’s among the first to connect the dots on who’s on the way out, therefore where there will be openings. You should invest your time in befriending him and letting him know you’re in the market for a new job. Currently, many of those the weak ties you can arrange to connect with on social networks such as LinkedIn.

The Hidden Power of Weak Ties

There is such power in weak ties for four reasons.

• Traditional networks function like closed, risk-averse systems. Those in them all share the same jobs data. Moreover, they may hesitate to tell you about them. They fear that if the situation doesn’t work out that will reflect badly on them. In addition, they tend to both stereotype colleagues and be fully aware of their flaws. So, they won’t let them know about openings which they assume will be a bad fit.

• Weak ties intersect with very different networks than your usual ones. That, in itself, opens up possibilities for work you won’t encounter through your strong ties. In addition, they have useful “inside information” on the organization’s culture, undisclosed problems and their ideal job candidate.

• Relationships with weak ties tend to be open and trusting. Little is invested in passing along a job tip to you so the stakes aren’t high for them. Also, since they don’t know you well professionally they don’t assume you can’t do the job. Strong ties tend to pigeon-hole you in a niche. They can also stifle original thought, making it more difficult for you to think out of the box about a job search.

• Weak ties can provide emerging ideas and perspectives not available through your usual social capital. That gives you competitive intelligence about what kinds of opportunities to pursue and how to present yourself.

Because networking is critical to success, most executives have developed patterns for doing that. For example, holiday social activities are made to do double-duty as networking opportunities. However, those best practices can harden into rituals in which you aren’t fully engaged. Moreover, they exclude possibilities for identifying and cultivating weak ties. Here are seven effective tactics:

1) Develop an accessible persona. That includes open body language, gentle facial expressions and the ability to listen, asking questions to get conversations going. This kicks off the Law of Attraction.

2) Open yourself to small talk. That old saying “All work and no play makes Jack a dull boy” also applies to not sharpening the instincts for casual connections. When commuting on the train, waiting in the doctor’s office and walking the dog, don’t be preoccupied with work.

3) Participate in professional and social events outside your specialization. Those could be as non-threatening as signing up for a few months of public-speaking training with Toastmasters. Or it could be a little more complicated like attending a local meeting of psychologists, even though you’re a lawyer. They will welcome what you can offer to them in networking as much as what you can gain from them.

4) Develop a communications vehicle which transmits your unique passion. That might be a newsletter, weekly radio broadcast, blog, podcast or YouTube series of presentations. It could be about animal rescue, the Steelers or doing business in Russia. Your enthusiasm will be contagious.

5) Be involved in Facebook. According to Jobvite, 83 percent of job searchers rely on Facebook. No, it’s not just for posting family photos or promoting your company. It’s a platform for cultivating weak ties in an informal way. Most of your Facebook “friends” are not colleagues. Respond to their posts, indicate you are there to help them with their marketing plan and celebrate their accomplishments. In addition, you can attract recruiters you don’t normally do business with. In the “edit profile” section provide them with details about your work history and where you are heading.

6) Become interested in other people on Twitter. Strategically plan whom you want to connect with on Twitter. Then join in their discussions, let them know what you have gained from their insights and share what fascinates you. Eventually, ask for help in your job search. If they work at Company X, ask the best people to contact there for an informational interview. Some of this conversation might be brought offline.

7) Exploit networking opportunities on LinkedIn. Configured as a professional network, LinkedIn is a multi-dimensional tool for connecting with those you need to know. Do your profile right and it could attract everyone from professional recruiters to chief executive officers hunting for a new head of compliance. Premium membership allows you to search in companies and fields of expertise for contacts.

The current winners in the new economy, ranging from venture capitalists to app designers, keep their networks diverse. One of their objectives is to continuing developing fresh kinds of contacts. The taxi driver in Moscow might have the most useful insight on oil futures. Yes, this requires an investment in engaging. Attention has to be shifted from the work on the desk. But the alternative – rigid networking – puts you at a professional disadvantage. Smart players are starting those conversations.