How to write a great Thank You Letter/Follow-up Email 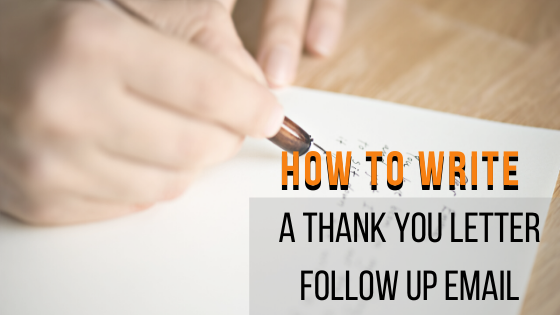 When applying for a job with a new prospective employer, it’s usually a good idea to send a follow-up or thank-you email, assuming you really want the job. There are a number of reasons for this: for one, it shows that you really enjoyed meeting with the people at the new company and that you really want the job itself. Second, and perhaps the most important, it puts you back into the minds of these prospective employers, as they are undoubtedly sifting through a number of other resumes and interviewing other job applicants. The more you can stay on all their minds, the better chance you have at getting the job above another applicant who is just as qualified and charming as you. The follow up / thank you email is an ideal way to do this without going overboard by sending, say, a thank-you gift basket.

However, the follow-up/thank you email also needs to be properly written, which is probably another reason people avoid taking this extra step when applying for a gig. As with anything written, there is a proper structure for these follow-up / thank you notes to prospective employers which should be followed if you want the best chance at getting the job. This structure is broken down below, based upon the example letter included here.

How to Properly Write a Thank You Letter / Follow-Up Email

Off the bat in this follow-up/ thank you email, you will want to recall the interview, what you enjoyed about it and what your impressions of it were. This example letter instills confidence in the person writing it from the outset by reminding the reader of their talents, yet also thanking the reader, or more specifically the prospective employer, for being straightforward and clear about the job that needs to be done. By doing all of these things, the employer is reminded of how well the interview went.

People who are interviewing for new jobs at big companies are usually working somewhere else that is similar or have worked in that field for a similar company. As is the case in this example letter, the candidate delves deeper into the discussion about the state of the IT industry they are working in, recalling a conversation that was clearly had during the job interview. Yet the candidate moves on to compare the company he has worked for in the past doing a similar job but how he could do much more for the company who he is applying to, demonstrating value as an employee, if they are hired. In fact, the candidate even goes as far as to say “we” in the letter, making the assumption that they are already a team. By doing this, the prospective employer is already envisioning the candidate as being part of their team, albeit for the purposes of the letter. However, the candidate takes this strategy to the next level by outlining how they will help the company if they are hired, without coming right out and saying that.

The prior paragraph goes directly into a list of ways they will help the company to succeed. This is risky, as they may say something that the candidate may think won’t work, but it also displays honesty and transparency they will have when working for the company, which an employer greatly values. However, as long as the project strategy, as bullet-pointed here, is well-defined, it doesn’t necessarily matter to the prospective employer if it will actually be implemented—they just like to see that the candidate will have thought everything through if they are a part of the team. This is important for a worker in general in the IT industry, as business climates are constantly changing and the employee, company, and methods for attaining goals will have to adjust.

After outlining what they would do if part of the company team, the closing is a paragraph about anticipation for the future. There is a brief recap of their skills and the fact that there is much more to the industry that they would be happy to talk about. The second to last lines is also one of the most important, as they finally come out and say how interested they are in working for the company, basically “asking for the sale.” This is much like presenting the ring after a long time living together—you want to work for this company and you look forward to the next steps.

While this candidate is not guaranteed the job by writing this follow up / thank-you letter, they have definitely helped their chances and left a good impression on this prospective employer. And this is really all they can hope to do.